Can it be?  Have we really reached the last post for this list?  Why yes! *and there was much rejoicing*  Since last February, I have been blogging about my Top 20 Favorite Fictional Couples, which was inspired by being single this past Valentine's Day.  (Fun Fact: I'm still single.)  From Mulder to Scully, to Kira and Odo, I've talked about why I love certain couples and probably revealed way more than I meant to, that I have no life.  But you know what I do have?  Um...Dignity! Yes, I have dignity.  (Fun Fact: No, I don't.  But I do have cats.)


Now we have reached the Top Five Couples.  Brace yourselves readers--these are all couples with many devoted fans--some more crazy than others. So without further ado, let's get to it...

Nope, not a gay couple.  Fred is a girl.  This is yet another couple from Joss Whedon.  So, as you probably should be aware of by now, it ends tragically with both Fred and Wesley dying.  What's particularly torturous about this relationship, is that after Fred dies, her body is used to host an ancient demon king, so Wesley gets to see her face every day to remind him of the woman he's lost.


Even more torturous?  They were literally together for less than one episode before Joss killed Fred.  They FINALLY hook up, after many, many episodes, nay, seasons even, of sending yearning looks, or being with someone else, before realizing that they're perfect for each other.  They kiss in one of the best and funniest episodes ever, and then in the next episode they're being super adorable and cute together and then this:


This, as you can imagine, sends Wesley spiraling into a depressing, kinda crazy place that he never fully recovers from.  Seriously, Joss Whedon loves to torture his characters. *shakes fist* CURSE YOU WHEDON!!

However, Wesley and Fred are both some of the best characters on the show.  Wesley went through tons of character development which was awesome.  He has a one-sided crush on Fred for a while, but Fred doesn't begin to return his feelings until the last season.  They went through ups and downs as friends, alas that we didn't really get to see any of their time together as a couple.

This was a couple that I did not see coming in the books, and yet, once they happened, I absolutely fell in love with them.  Lupin is a werewolf and Tonks is a metamorphmagus--meaning she can change her appearance at will.  Lupin is initially hesitant to start a relationship with her, because he is worried that since he is a werewolf, Tonks will be hurt, or will be ostracized from society.  However, Tonks eventually convinces him that she doesn't care about those things, and they wind up getting married.  Aww... And in the seventh book, they have a baby.  Awww...


And then of course, also in the seventh book they both, (spoiler alert) FRIGGIN DIE!! (STILL MAD ABOUT THAT!) And not only do they both die, we don't even get a death scene for them.  Yup, they die off-page.  *NOOOOOOOOOOO*  In the movie, same thing, death off-screen.  The most we get is a shot of their bodies in the Great Hall.  I'm still upset at JK Rowling for this.  Yes, I get that war is a bad, bloody mess and people die in it, but don't you think the deaths of Cedric, Sirius, Dumbledore, Hedwig, Dobby, Mad-Eye Moody, Snape and Fred Wesley are enough to teach us that? I think they are.


Well, at least there's fanfiction to read about them, plus a really good one that actually reverses their deaths, but also makes it line up with cannon, so in my head, they never actually died.

In case you haven't seen The Princess Bride, first may I congratulate you on successfully living in a cave all your life, and second, may I say that you are definitely missing out on one of the best movies ever made. This movie is considered a classic, and for good reason.  It contains some of the most quoted dialogue of all time, and it contains one of the most epic romances ever put to screen.  Don't believe me?  I present to you Exhibit A:


And that's all like in the first 15 minutes of the movie by the way...it only gets more intense from there...


Basically, watch The Princess Bride.  You won't regret it.

Star Wars is another classic.  Do I even need to tell you why Han and Leia are so awesome?  Has anyone in the universe not seen this scene?

If you haven't seen Star Wars I don't think we can be friends. Han Solo is the lovable rouge charmer, and Leia is the responsible, stubborn, princess.  Of course they wind up together.  With an off the charts level of chemistry between them, disguised under all their bickering, they just fit perfectly together.  Also, I like that they save each other--it's not just Han coming to the rescue all the time.

They totally earn the number two spot on my list for being just so badass, awesome, sweet, and appearing in one of the coolest, funnest, awesomest, bestest movie trilogies ever made.

And now, finally, we have reached...

Is there any fictitious romance more famous than that of Elizabeth's and Darcy's?  Elizabeth is smart, stubborn and jumps to conclusions.  Darcy is awkward, a bit proud, and also stubborn.  They are perhaps the most iconic example of the "slap, slap, kiss," relationship.  Elizabeth actively despises Mr. Darcy for more than half the novel, and his first proposal to her comes as a complete shock.

She completely rejects him, which has the effect of him making an effort to be a better person, in order to win her love.  This is where both Elizabeth and the reader sees the sweeter, kinder side to Darcy, and realize that he's actually not all that bad as we once assumed he was.

Elizabeth's attitude towards him softens, and she spends some time with him while visiting her Aunt and Uncle.  Of course, Elizabeth loves to read, so one day, Darcy decides he wants to do something for her.   So from the advice of his talking candlestick he gives her the entire library at Pemberly... 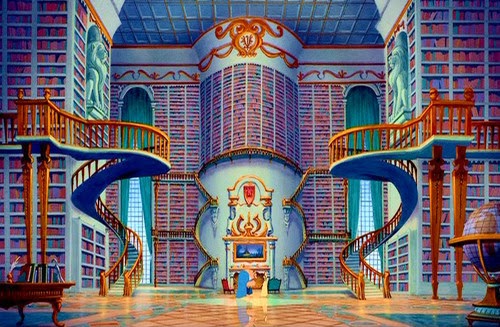 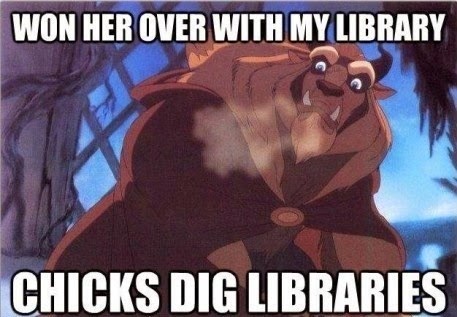 Yeah, Beauty and the Beast is pretty much just an animated version of Pride and Prejudice.

In the end, after much angst from both sides, Darcy proposes again, and this time Elizabeth accepts.  What I love about them as a couple is that their relationship comes after much struggle on both of their parts.  They both change, and both admit that they were wrong about each other.  The fact is that they fit so well together, that Elizabeth, who has sworn to only marry for nothing but the deepest, truest love, agrees to marry Darcy.

Also, what I like about Elizabeth and Darcy, is they get to go live at Pemberly together, and be filthy rich and in love.  Darcy literally rides a white horse.  They are just such a perfect representation of what ideal happy endings are like that there is no way they would ever not make my number one spot of Favorite Fictional Couples.

So did I miss any of your favorites?  Let me know with a comment.  : )

Until next time readers, I leave you with a Fun Fact: Joe Wright (director of the 2005 version of Pride & Prejudice) was not initially keen on Keira Knightley playing Elizabeth, believing her to be too attractive.  He changed his mind upon meeting her, deciding her tomboyish attitude would be perfect for the part.